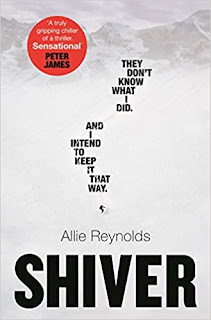 Before I review this book I’ll come clean. I 'met' Allie several years ago through an online writing group, writing short stories for womags.

The group grew to be very large and we drifted off to a smaller groups. The group I stayed in touch with, and am still part of today, currently has five members including myself.

Finding the right writers’ group is not an easy task. I have been to a couple of physical groups but never found other writers who were on the same wavelength as myself and my writing until I met these girls.  Over the years we have come to know each other really well and provide constructive criticism and support. I know that I wouldn’t have had the stories published that I have without their help and advice. It’s just a pity that we can’t meet up in the flesh as geographically we are just too far apart, especially as Allie lives in Australia.

Allie has recently had her first novel, Shiver, published in hardback and on Kindle.  Right from the beginning of her submission to agents, Allie has had brilliant success, with several agents wanting to represent her, followed by a bidding war by publishers. The book has sold internationally and she even has an option on a film.  Not bad for a first novel!

And it is deservedly so. I’ve just finished reading the complete novel and I have to say that I couldn’t put it down. I’m not just saying that because I know her. If I didn’t like the book, I would just keep my mouth shut.

Shiver is set in French resort of Le Roche, where five friends are invited back for a reunion, ten years after they were last there. They were all competitive snowboarders competing in the ‘half pipe’ which seems to me to a be a truly dangerous sport and something I would never have the guts to attempt.

There is tension from the beginning as no one knows who has sent the invitations and there is also an atmosphere of mistrust as the last time they were together, one of their friends, Saskia, went missing, presumed to have become buried in one of the treacherous crevices which form on the mountain. No one really knows how much each person was involved in Saskia’s disappearance.

An “icebreaker” game turns sinister and then they realise that they are trapped in the out of season ski lodge. Everyone begins to doubt the other as they try to work out who has trapped them here and why?

The story alternates between the past and the present as we gradually learn that each of the friends has secrets they would rather keep hidden. The tension never lets up as we are drip fed information and try to solve the mystery as we read.

Allie was former competitive snowboarder herself and she uses this to bring the atmosphere of both the setting and the sport alive.

If you like page turning thrillers, I would definitely give this book a go.

Well done Allie, and good luck with next book. Can’t wait to read it.

December 09, 2020
Yesterday was a momentous day as the first COVID vaccines were administered to the elderly of our nation. Once more we need to be thankful for our NHS service which has the capacity not only to deliver these vaccines but also to do so without charge. We have a lot to be thankful for, not least that thanks to research, it has been developed in the first place. At last there looks like might be an end to the uncertainty and never ending fear of COVID even if it’s not until well into next year.   Across the world people are set to experience one of the loneliest Christmases in living memory. My heart goes out to anyone who lives alone and I am extremely grateful for the fact that my own widowed mother currently lives with my youngest brother so even if we can’t go and see her she will not be alone.   I currently live with my husband and two sons so I won’t be alone this Christmas either but celebration with the wider family is definitely looking doubtful at the moment.    I’m very behind
1 comment
Read more

November 08, 2019
As ever I started off the year with good intentions and I made some initial progress writing and submitting a couple of short stories. Then I turned my attention to my current novel in progress. I had rejoined the Romantic Novelist’s Association New Writer’s Scheme, and my aim was to edit a mostly complete first draft into something I was happy to submit for feedback.  Unfortunately this took a lot longer than I had anticipated. There was a lot to rewrite and some holes in the plot which needed some serious rethinking and which involved large amounts of writing from scratch. The novel is set in my home town, Chester, but takes place during the first few years of World War II. It follows the story of two sisters as they reach adulthood, struggling against the backdrop of war and the difficult relationship they have with each other. By the time I had completed it, it was early August. I was happy with what I had done but was equally as happy to send it off and start work on some
1 comment
Read more