It's Been Three Years 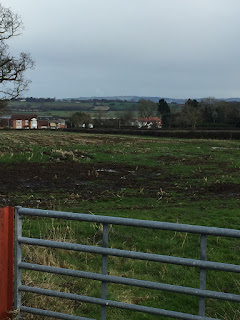 Three years ago today I suffered a subarachnoid haemorrhage, more commonly known as a brain haemorrhage. It came completely without warning and for nearly twenty-four hours I didn’t even realise what had happened to me. It felt like the worst headache I’d ever experienced and being a previous migraine sufferer, extreme headaches were something I was familiar with. I took painkillers and went to bed, little realising that this was the absolute worst thing I could do. I was told later I should have called the emergency services straight away. But who dials 999 when they have a headache?

It was a Saturday evening and I was going out with my husband to celebrate his birthday which would be on the following Monday. I was feeling tired but didn’t want to disappoint him. We went to our local pub and had booked a table at our favourite Italian restaurant. As we were walking across the road from the pub I felt a sharp, sudden cramp in the back of my neck. Mike asked me what was wrong but I brushed him off and continued on towards the car. As I got into the car I felt a splitting pain across the top of my skull as though I’d been hit over the head with a hammer. Apparently these are classic symptoms of a brain haemorrhage but I was completely unaware.

I’m sure everyone has seen the adverts to spot the symptoms of a stroke, telling them to act FAST. A brain haemorrhage, is also a form of stroke but who would know how to spot one? Only fifty percent of people who suffer from a subarachnoid haemorrhage survive long enough to reach hospital and of those who do, there’s a high risk of dying within the first three weeks or of becoming permanently disabled.

I, though, tried to continue with my evening, even though my husband tried to persuade me to go home. Eventually I had to admit defeat and drove home. Can you believe it? I actually drove home. I hadn’t had anything to drink and it was only a headache after all.

The next morning, when I was lucky enough to wake up, the pain was worse, my neck was stiff and the light hurt my eyes. I began to think along the lines of menigitis and phoned 111. They sent a paramedic and then an ambulance and it wasn’t long before I was being blue lighted to hospital. A CT scan revealed that I’d had a brain haemorrhage and from there I was blue-lighted to The Walton Centre, which is a specialist neurological centre in Liverpool.

The next day, a further CT revealed that I had suffered from a ruptured aneurysm.An aneurysm is a blister which forms on a blood vessel leading to the brain. If it is weakened in any way the blister can burst and the blood which is pumped from the heart to the brain bleeds out, potentially causing death.

Aneurysms can develop in anyone at any age but are more common in people, especially women, over the age of forty. I was forty-nine. I realised I could have had this unexploded bomb in my head since birth.  The aneurysm in itself isn’t dangerous, it’s only when it ruptures that causes the problems. No one really knows why an aneurysm might suddenly burst: high blood pressure, physical exertion, stress. The doctors told me that they wanted to operate. Small metal coils would be inserted into the pocket of the blister to seal it and prevent any more blood from escaping. After that, only time would tell. I was stunned and couldn't believe that I was about to have brain surgery. This was on the Monday, the day of my husband's birthday. My phone had run out of charge so I couldn't even let him know. What a conversation that would have been. 'Hi Darling, happy birthday, by the way, they're just going to operate on my brain.'

They explained that the surgery wouldn’t take place through my skull. Instead a catheter would be inserted into my groin up to my brain and the coils would be guided by ultrasound. Isn’t that amazing? I remembered being relieved that I wouldn’t have my head drilled open. Obviously the operation was a success and I spent the night being monitored in intensive care, where my poor husband spent his birthday evening.

Ten days later I was back at home, but it took me months, if not years to fully recover. In those years I suffered from severe fatigue, memory loss, brain fog and loss of confidence. A form of PTSD kicked in and I couldn’t get rid of the thought that I might have either died or being left permanently disabled and had mild panic attacks whenever I saw blue lights on an ambulance.

But recover I did, and have now written a memoir about my experience. It took me a while to be able to get my thoughts down on paper and NaNoWriMo helped me by giving me a deadline. I’m now at a stage where I am submitting to agents whilst further polishing the rest of my manuscript. Feedback so far is that it is good read and well written but no bites so far. Perhaps it’s completely the wrong time to be trying to get a book like this published but I’m very aware of the passage of time and will continue with my efforts. After enough tries, if I can’t get either an agent or a publisher, my aim is to get my manuscript professionally critiqued and then self-publish.

More than anything, I’m now just glad to have survived. I was one of the lucky ones, thanks to the NHS and the fact that I lived close to a specialist centre who knew exactly what to do and how to do it.

It’s been a long road, but I want to let people know that symptoms of a brain haemorrhage should be taken seriously and should be acted on straight away. Also, that although recovery can take a long time, it is possible. You just need to persevere.

December 09, 2020
Yesterday was a momentous day as the first COVID vaccines were administered to the elderly of our nation. Once more we need to be thankful for our NHS service which has the capacity not only to deliver these vaccines but also to do so without charge. We have a lot to be thankful for, not least that thanks to research, it has been developed in the first place. At last there looks like might be an end to the uncertainty and never ending fear of COVID even if it’s not until well into next year.   Across the world people are set to experience one of the loneliest Christmases in living memory. My heart goes out to anyone who lives alone and I am extremely grateful for the fact that my own widowed mother currently lives with my youngest brother so even if we can’t go and see her she will not be alone.   I currently live with my husband and two sons so I won’t be alone this Christmas either but celebration with the wider family is definitely looking doubtful at the moment.    I’m very behind
1 comment
Read more

November 08, 2019
As ever I started off the year with good intentions and I made some initial progress writing and submitting a couple of short stories. Then I turned my attention to my current novel in progress. I had rejoined the Romantic Novelist’s Association New Writer’s Scheme, and my aim was to edit a mostly complete first draft into something I was happy to submit for feedback.  Unfortunately this took a lot longer than I had anticipated. There was a lot to rewrite and some holes in the plot which needed some serious rethinking and which involved large amounts of writing from scratch. The novel is set in my home town, Chester, but takes place during the first few years of World War II. It follows the story of two sisters as they reach adulthood, struggling against the backdrop of war and the difficult relationship they have with each other. By the time I had completed it, it was early August. I was happy with what I had done but was equally as happy to send it off and start work on some
1 comment
Read more