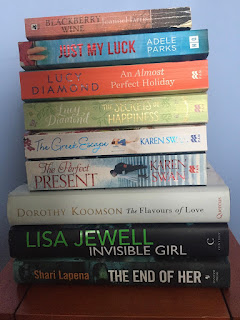 I’m just wondering if the kind of books you read changed during lockdown? I think mine did.

For Christmas I received the book, Just My Luck by Adele Parks, which was a book I very much wanted to read after listening to Adele Parks’ interview on the Richard and Judy Podcast.

However, when I did sit down, looking forward to a satisfying read, I’m afraid I was disappointed.

Don’t get me wrong, I’m a big fan of Adele Parks and the book was well written, as to be expected, but I actually found the subject matter to be quite uncomfortable.

The story centres around three couples who have known each other since their children, now teenagers, were born. They were part of a syndicate, buying a Lottery ticket using the same numbers each week, and gathering at each other’s houses on a Saturday night to see if they had won.

However, the week before the story begins the friends fell out and two couples dropped out of the syndicate. The woman who had always been responsible for buying the tickets, though, bought a ticket the following week, using the same numbers. And of course, this week, the numbers came up and the winning ticket was worth £18 million.

So, what made me feel uncomfortable when reading this book was how winning that kind of money changed people’s personalities and broke down relationships – more than just the three couples involved. I’m sure that’s exactly what Adele meant to convey but I found that I didn’t like reading about such greed and the lengths people were prepared to go to, to get what they wanted and felt they deserved. I did read to the end of the book although I had to admit that I turned the last page over with a sense of relief.

My reaction made me think about the types of books I’ve been finding enjoyable recently and it was only then I realised that during lockdown I have been seeking out books and authors to make myself feel happy, rather than books that present a challenge. I’ve even revisited books I’ve previously read and enjoyed to be certain of a happy outcome during such uncertain times.

Don’t get me wrong, I have read a few thrillers and particularly enjoyed Blood Orange by Harriet Tyce, Invisible Girl by Lisa Jewell and The End of Her by Shari Lapena but on the whole I’ve tended to favour more feel good books by authors such as Lucy Diamond, Debbie Johnson, Fiona Gibson, Cathy Bramley, Veronica Henry, Erica James and Karen Swan. That’s not to say the characters in these books don’t experience hardship or emotional trauma, it’s just that I know that it’s all going to come good in the end.

I did read some new authors and enjoyed The Flatshare and The Swithc by Beth O’Leary and In Five Years by Rebecca Searle, but overall I’ve felt that I needed to find comfort in my reading matter.

What about you? What have you been reading over the last year and have your tastes changed during lockdown?

Covid and My Work In Progress

March 31, 2021
Despite still being in lockdown, 2021 seems to be rushing along at a breakneck speed. I can’t believe that this weekend the clocks went forward and the nights are lighter. (Let’s hope the weather continues to improve).     I’ve been working hard on my writing so far this year and one of my goals was to get one of my long standing works in progress to a stage where I can submit it to agents. But I’ve realised there’s a major snag in my plot – and it’s all thanks to Covid – the gift that keeps on giving.   My work is a contemporary novel based around a professional woman who is desperately trying to balance her marriage, being a mother to young children and her career.    My heroine is the breadwinner of the family as her husband has recently become a full-time student to retrain. On her return to work from maternity leave after having her second child, she finds that her lovely boss has been replaced with the boss from hell. He’s a bully and seems intent on pushing her out of her job, s
Post a Comment
Read more